2021 WISHES AND NEWS LETTER FROM THE D. MPONDO FAMILY 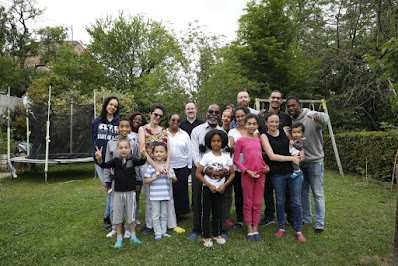 At the dawn of the New Year, we are happy to wish you to enter with confidence in this Year 2021 in the presence of the Lord! Thanks to all who have already sent their wishes. Receive ours best wishes for the New Year.

The year 2020 has been a year of extremes for the family. We experienced joys with the celebration of Dad’s 70th Birthday, with a family hike in the mountains as well as the baptism of Cecile, the trip to the Aunties in Brittany and then in Normandy, Malik’s wedding and the parents’ trip to Corsica. But also, to the inconvenience of the pandemic which led to the cancellation of many family projects as well as The Maéva Sev Mission’s, were added successive daddy’s health problems. Nevertheless, by the grace of the Lord, we can face the future with serenity! 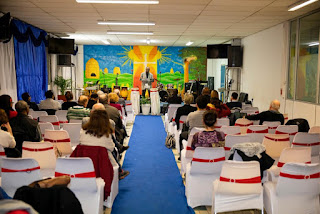 We started the year with the celebration of Dad’s 70th Birthday “Funeral”. He wanted to celebrate this anniversary in accordance with his convictions and a tradition inherited from his father, as his funerals, because there will be none upon his death. It was a chance to get to know who his real family and his real friends were. The party began on Friday evening with a vigil at the MIEL Church 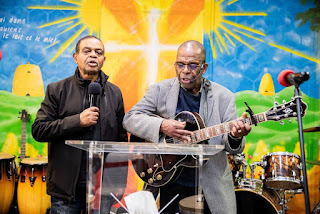 This vigil, as well as the worship the next day, had been prepared with some friends of the MPN church and especially the praise group of the MIEL Church of the apostle Sébastiao Ntela. The vigil had been organized in 3 three-hour vigils; started at 9:00 p.m. and ended the next morning at 6:00 a.m. It was interspersed with snacks during the 10-15 minute break between each vigil. It was Uncle Joly (Pastor Emmanuel Mpondo), Daddy's brother who came especially from Cameroon, who led the ceremony. Dad gave his testimony throughout the evening. He was joined by friends and brothers in Christ who testified of their encounters with him, or related some anecdotes about their relationship.

The party continued on Saturday afternoon with a worship of thanksgiving service at the EPIS Church followed by a reception in its premises. It was an opportunity to exchange with friends and acquaintances that we had not seen for a long time. 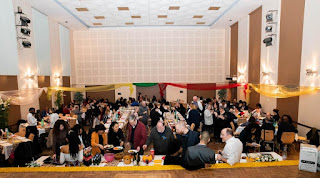 We continued with a banquet in a room in the neighboring city, Illkirch town, in the evening, and were we ended on Sunday, the next day, with a family meal. The party was so beautiful! 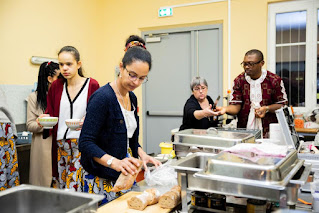 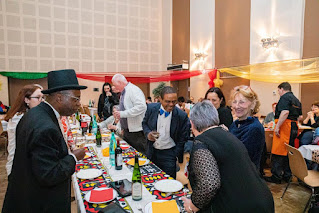 It was then that the first confinement occurred. Against all expectations, it was a period that allowed a family reunification, to rediscover each other. It was also a time for personal reflection for everyone. It had been a long time since we had played board games together and hadn't gotten together around a table so often to share meals, chat, and discuss etc. that motivated us for the next step. 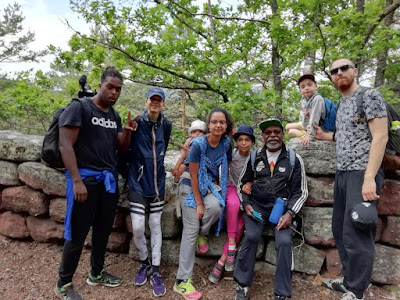 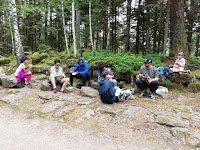 After confinement, we met as a family for a hike at Mont Sainte Odile in the Vosges. We walked, climbed low walls, sang scout songs and took a picnic break. After the meal break we picked up blueberries for a future pie. On arrival at the top, at Mont Sainte Odile, we were invited to an ice cream tour... 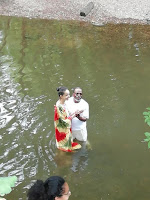 The second happy event was the baptism of Cécile that the first confinement led to the decision. We organized a family baptismal service according to her choice, at the home of her elder sister, Marie-Agnes Muller, in the city of Lingolsheim where she lives. Dad was the officiating pastor and led her into the baptismal waters in a neighboring river. 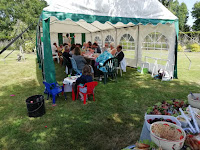 In July, we went to Normandy to celebrate the 60th anniversary of Auntie Veronique as well as her retirement. After a short stay with Auntie Nanette in Montmain from where we visited the pretty little village of Saint-Aubin where the river Aubette has its source in Branville with watermills throughout and its old factories. Cécile, who first went to Lyon to stay with Serge, joined Tata Isabelle for a short stay with her in Brittany. They then joined us both for Auntie Veronique’s party. It is always a special moment when we meet as a family in Normandy. We organized picnics and visited lots of places by the sea.

Cécile having taken her train back to Strasbourg, we left for Brittany with Auntie Isabelle with a stopover in Le Havre where we visited Auntie Françoise and Uncle Claude and took the opportunity to make a pilgrimage to where Grandma Isabelle lived and where the Ménard children were going to spend the holidays when they were little. 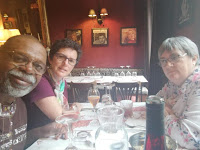 In Brittany we visited castles and we went for walks in the forest. Auntie Isabelle offered us a gourmet evening at the restaurant at the old Prison. Our stay was wonderful! 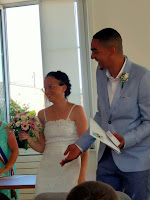 The third major even was the marriage of Malik and Deb in strict family intimacy due to the pandemic. The event was almost postponed, but thanks to the pugnacity of the bride and groom it was maintained, but in a restricted family circle. 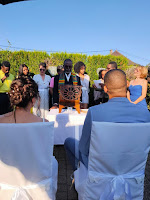 After the ceremony at the Town Hall of Souffelweyersheim, the religious ceremony was held in the garden of Anne, Deborah's mother, where dad served as pastor. We had prepared a little surprise for the bride and groom: a choir in Douala led by Uncle Francis who came from Agen, a city in the South of France, for the cause. After the religious ceremony we ate and drank. Some have sketched some dance steps. We enjoyed ourselves in this occasion! 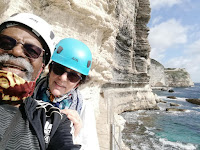 The other happy event was the trip of Mum and Dad to Corsica. For his birthday he had preferred a participatory envelope rather than gifts. It was a wonderful journey on which Dad communicated a lot on Facebook. We give thanks to the Lord for all these quality times with family, friends and brothers and sisters in the Lord

But also, we have been impacted like everyone else by the coronavirus and the major health crisis as well as the economic, and social and societal crises that it has caused and still causes. But on top of all this, we have experienced great distress with dad’s health problems: in the space of ten days, he underwent two surgeries, the first on the prostate from whom he is still awaiting the results of the biopsy and especially the operation on his left knee which made him suffer for more than a month including 20 days of pain such as he had never experienced since birth! He is getting better and better now.

The eldest children live their lives with their families. Cécile is in her 6th year of medicine, Ékédi in her gap year whose plans have been completely disrupted by the pandemic. She was due to go on a humanitarian mission to Ethiopia with a Christian organization Tearfund and the project, like many others on her agenda, was canceled due to the pandemic. She is currently in the UK through another Christian Organization for a few months. Our 12(-1) grandchildren are doing well and are all our immense joy. We give thanks to God for this great family He has given us!

Mum has always "a ministerial program" even in times of confinement, always in a meeting somewhere. She remains a refreshing and invaluable support for the family. May the Lord renew her strength!

That's the news we want to share with you as we enter the New Year 2021. May the Lord Elohim and Father of our Lord Jesus Christ bless you abundantly!