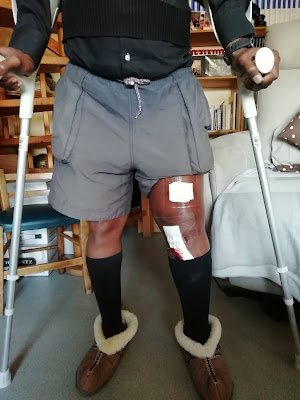 Until that day, I had neither the strength nor the desire to communicate about what I was going through, after having communicated extensively about the happiness of our trip to Corsica. This is the latest post on WhatsApp from a Sister in Christ of the Movement for African National Initiatives (MANI) team about the "Prayer Shield": "Let's cover each other in prayer", “Let’s cover one another in prayer” which decided me to publish this message. Actually I only shared it with few people, I did not want to bother you with my health problems hoping the Lord to heal me quickly and that I would only have to tell you: I was sick, now I am healed, Glory to the Lord! All the more so as I was in constant connection with a few who had heard from me, whom I had thus been able to update and who were already praying for me.

Today 12 Dec. 2020, it's been 23 days since I had an operation on my right knee. An operation that had been postponed twice because of the Covid-19. But ten days before I had had prostate surgery, which I was waiting for the results of the biopsy for two weeks later. Everything had gone so well that I did not find it necessary to postpone the knee operation a third time.

But my brothers and sisters, dear friends, I have just spent 20 days in pain such as I have never experienced in my life and I have been operated on ten times since I was 20 years old. However, all those who encouraged me to take the plunge assured me that it would be a "light" operation with modern methods and that it was worth it rather than suffering a little every day. But right the day after the operation I had an edema and my leg began to swell to the point of doubling in size (without exaggeration) and I had bruises from the thigh to the sole of the foot, accompanied by excruciating pain, despite painkillers including morphine. So much so that I found myself in the hospital again 4 days after the operation. It hadn't changed the situation and was in more pain!

It was on my return to the post-operative consultation that the surgeon explained to me the reasons for these pains and his decision to do nothing when I returned 4 days later: the solution would have been to open again in order to drain the bleeding, but the risk benefit was unfavorable because I was already taking anticoagulants for my heart problems and moreover, he had put me on anticoagulant treatment (Lovenox: one injection per day for a month) because of the surgery he had just performed. I would surely have continued to bleed, which would not have changed the situation, and a second opening would have made healing more difficult! He then prescribed me 3 physiotherapy sessions per week to start immediately.

That is why I suffered for 20 days. But for three days that I have the physiotherapist at home, I start to put my foot on the ground. The pain is still present, especially at nightfall, but much more bearable. I stopped taking painkillers to avoid the addiction they could cause and its consequences. This is probably the cause of the reactions I have been feeling for the past few days (wheezing, dizziness, intense sweating followed by a sensation close to fainting ...)

But this experience led me to realize how much I failed to express daily my gratitude to the Lord for all that He does including the things which seem so simple and obvious to me. It was with tears that I asked His forgiveness!

- If you can get up every morning from your bed without suffering pain and without needing anyone's help, praise the Lord!

- If you can wash, dress and get out of your house, praise the Lord!

- If you can just go outside and watch the stars twinkle in the sky, thank the Lord for it is a grace!

- If you can walk in the forest or in the bush, by the sea, a pond or an ocean, thank the Lord!

- If you can get to your work whatever the means used with only financial or other worries that cannot prevent you from accomplishing your project you must celebrate the Lord!

Beloved in the Lord, it is when I am deprived of these gestures which seem simple and obvious and easy to me that I realize the grace I had to be what I am: a human being made in the image of God, a creature of the Lord! So I can realize with the psalmist that:

“When I consider thy heavens, the work of thy fingers, the moon and the stars, which thou hast ordained; What is man, that thou art mindful of him? and the son of man, that thou visitest him?”

Then I only have to say:

"I will praise thee; for I am fearfully and wonderfully made: marvelous are thy works; and that my soul knoweth right well." Ps. 139:14

I am still lying on my convertible chair, I receive a visit every day from my “personal nurse”[i] (my daughter) and three times a week from the physiotherapist. I have started to put my foot on the ground and to walk little by little. The pain is still there, but not as strong and not for a long time (shall I proclaim!) and I have started planning my missionary actions again. I know that with the brothers and sisters prayer shield I will soon be on my feet and I bless the Lord!

May His grace and Peace which surpass all human intelligence be abundantly with you and all those who are dear to you, AMEN!

[i] I was well surrounded by the medical staff from which my family benefits: my son’s mother-in-law and two daughters who are nurses, my daughter, a future doctor who took care of my daily injections, and a brother in Christ Physiotherapist who helped prevent a catastrophe in the field of physiotherapy.